Construction on the Chrysler Building began when the Twenties were still ‘roaring’; by the time it was completed, in 1930, the stock market had crashed.  Booms and busts and recessions have unspooled over the years, and the gleaming Art Deco crown of the structure designed by William van Alen, with its radiating terraced arches and triangular windows,  has graced New York’s skyline throughout: instantly recognizable…and especially stunning at night or in angled sunlight.  It’s one of my favorite sights, be it in person or on a printed/digital page.  For me, it hearkens back and pulls forward at the same time.  (The B+W photo at the top of the post is by Peter Fauland). 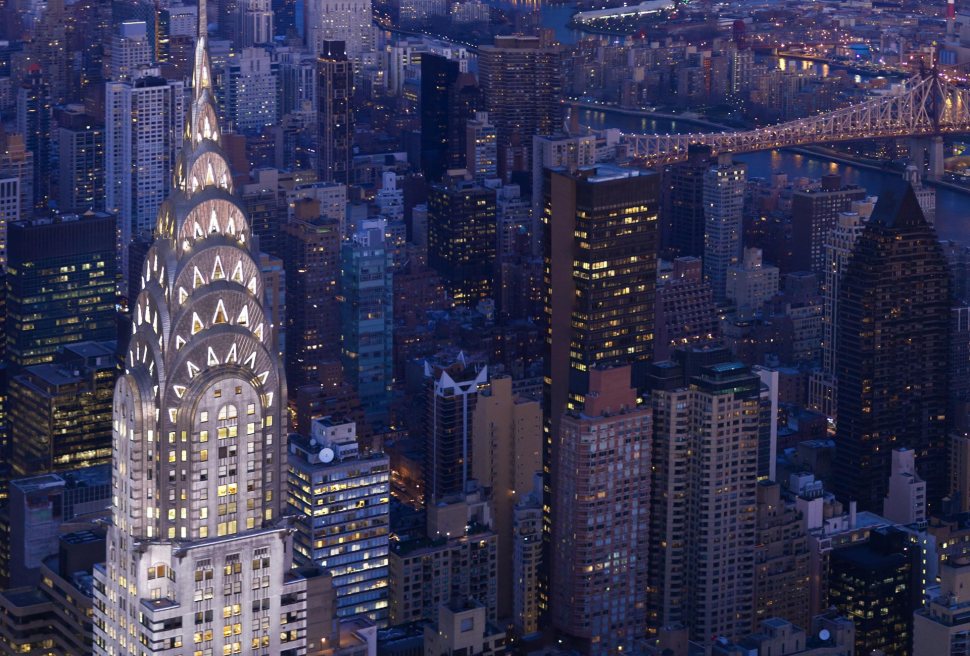 And that crown really does gleam.  As Claudia Roth Pierpont wrote in a November 2002 article in The New Yorker, “…the Chrysler dome and spire…were clad in a revolutionary metal that looked like an alloy of steel and light.  The use of diamond-honed Enduro KA-2 steel, de­veloped by Krupp in Germany after the First World War and exhibited for the first time in 1926, was Chrysler’s most signif­icant decision.  He had had it tested for months, to be sure that no amount of exposure would tarnish its almost metaphys­ical silver glow.  When the top of the build­ing was revealed, in 1930, critics marvelled at the incandescence that made it a bea­con even to ships far out at sea; not a sin­gle metal sheet has ever been replaced, and on clear days the Chrysler tower is still outshone only by the sun itself.”

The building’s lobby is equally stunning, with marble and marquetry replacing stainless steel as the striking visual element.

One might think Van Alen’s future success would be assured after designing such a building.  But the exact opposite happened.  As revered as the structure is now (it received landmark status in 1978), it was not well received by critics after it was completed.  With the Depression now underway, new commissions weren’t forthcoming.  And most humiliatingly, the architect had never signed a formal contract with William Chrysler, who refused to pay the architect his fee.  After being forced to sue, Van Alen was eventually paid, but his reputation was broken.

Trivia tidbit: Van Alen was born, in Brooklyn, in August of 1883, two and a half months after the opening of another iconic New York City structure.