Consider these words from one of The New York Times‘ music critics, Zachary Woolfe, which will appear in the print edition of Sunday’s paper:

“A man, a country and an era came together in Leonard Bernstein, the musician of the American century.

After 150 years of insecurity as this country gazed across the sea at the edifices of European culture, here was the New World finally in command. Composer, conductor, arranger, pianist, television personality, star, Bernstein — a Jew, crucially, just a few years after the Holocaust — marched Mahler back into Vienna, a second wave of liberation, a musical Marshall Plan. Bold, maybe a little brash; tender, maybe a little sentimental; difficult to work with yet desperate to please: Bernstein’s qualities were America’s, too.”

It’s a great description.  Bernstein was complex.  Passionate.  Flawed.  Brilliant.  Indelible.  His motto could easily have been these lines from Walt Whitman:  “I am large, I contain multitudes.”

Regarding either his music or his conducting, there’s very little, if anything, I can add to the myriad commentaries that have been appearing in both print and broadcast formats as the centennial has approached (offerings from The New York Times and NPR are especially good; consult Google).  I can, though, comment on what I’ve always enjoyed most about his own music: the fact that it’s so often harmonically and rhythmically interesting.  (And he had a knack for achingly beautiful melodies, too).

Those qualities are on ample display in what is certainly Bernstein’s most familiar work, his score for West Side Story; it’s my personal favorite.  (His Chichester Psalms, which I wrote about here, are a close second).  A retelling of Shakespeare’s Romeo and Juliet, the musical tells the story of a love affair playing out in the midst of a gang rivalry (white Americans vs. Puerto Rican Americans).  (Interestingly, an earlier version, East Side Story, envisioned a love affair between a Jewish girl and a Catholic boy on New York’s Lower East Side).  The show opened on Broadway in 1957 and was made into a movie in 1961.

Humphrey Burton, a friend and biographer of Bernstein, noted: “…West Side Story is universal. It touched a nerve at the time, and because the play was about bigotry, and the need for tolerance, it’s still as relevant as it ever was.” [Italics mine].

Bernstein later extracted nine sections from the West Side Story score and assembled them into an orchestral work called the Symphonic Dances, the world premiere of which, conducted by Lukas Foss, was at a February 1961 gala fundraiser for the New York Philharmonic’s pension fund (Bernstein was the NY Phil’s Music Director from 1958 – 1969).  The concert, at Carnegie Hall, also featured Bernstein’s Overture to Candide (with Aaron Copeland at the podium).

Composer Jack Gottlieb, a close friend of Bernstein, outlined the sections as follows (the timings refer to the video below):

Prologue: The growing rivalry between two teenage gangs, the Jets and Sharks.

“Somewhere” (starts at 4:52): In a visionary dance sequence, the two gangs are united in friendship.

Scherzo (starts at 8:54): In the same dream, they break through the city walls, and suddenly find themselves in a world of space, air, and sun.

Mambo (starts at 10:22): Reality again; competitive dance between the gangs. [Editorial comment: how fun to be able to shout out “Mambo” while playing!  Twice!]

Cha-Cha (“Maria”) (starts at 12:49): The star-crossed lovers see each other for the first time and dance together.

“Cool” Fugue (starts at 14:32): An elaborate dance sequence in which the Jets practice controlling their hostility.

Rumble (starts at 18:15): Climactic gang battle during which the two gang leaders are killed.

Finale (starts at 20:29): Love music developing into a processional, which recalls, in tragic reality, the vision of “Somewhere.”

One can find plenty of worthy performances of this work on-line, but I opted for this one, from July 2014, by the National Youth Orchestra, conducted by David Robertson.  [Every summer, the Weill Music Institute, at Carnegie Hall, assembles young musicians from across the country (between just 16 and 19 years old) to form the National Youth Orchestra of the United States of America (NYO-USA).]  I like the fact that it’s an American group playing music by ‘the musician of the American century’ (see quote by Woolfe in my intro).  Even better, it’s being played by young people, a demographic to whom Bernstein conveyed his experience of music with such passion.  (Bonuses = all of those sneakers, and Robertson’s silent cheer–complete with fist clenches–at the end).

It’s a commitment, I know, but why don’t you consider setting aside about 24 minutes out of your day and taking a listen.  It’ll be time well spent and will, I expect, excavate some memories for many of you.

If you have a favorite Bernstein memory, or melody, please post a comment and tell us about it.

(Really obscure) trivia tidbit: Richard Beymer (below, with Natalie Wood as Maria), who played Tony in the film of West Side Story, played Benjamin Horne, in David Lynch’s groundbreaking TV series, Twin Peaks (in both the 1990-91 [below, L] and 2017 [below, R] iterations). 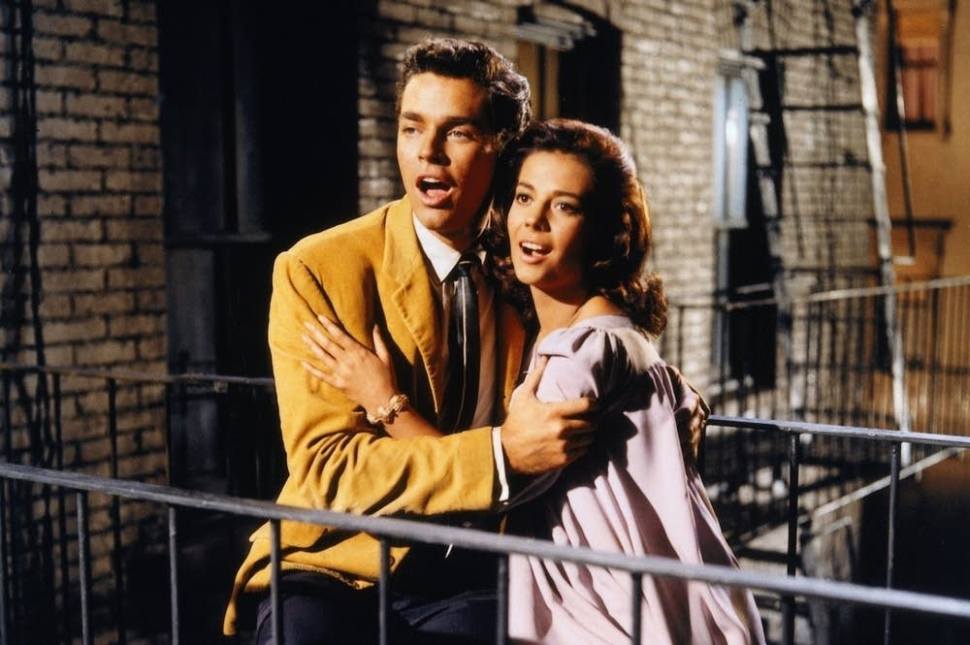 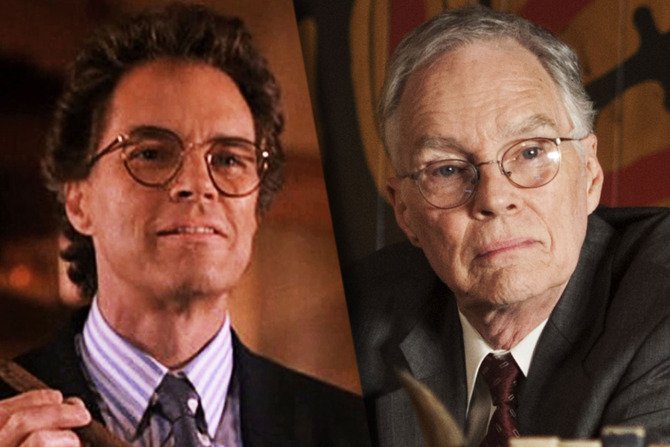 Final thoughts: One often sees interviews in which an individual is asked, “If you could have dinner with a small group of famous people, living or dead, whom would you choose and why?” If anyone were to ask me this question, Leonard Bernstein would be on my list. From everything I’ve read about him, Bernstein seems to have been a force of life: composer, conductor, pianist, author, and educator.  His daughter Jamie (who recently wrote a book about her father) is one of many who feel that it was his role as a teacher and educator that mattered most:

“[My father] was a man of many accomplishments, but he was proudest of his own achievements as a teacher.

There’s a Hebrew phrase that makes me think of [him]: “Torah Lishmah.” And it means, loosely translated, a raging thirst for knowledge. And [he] had it about almost everything! He just could not absorb enough information on the things that interested him: not just music but also Shakespeare, the Renaissance, world religions, Lewis Carroll, biology, Russian literature, the two World Wars, astrophysics, French drama — and any places where these topics overlap. His brain was on fire with curiosity. And what he loved most was to communicate his excitement to others.”