I’d like to tell you the story of a melody that started its life in the the 17th century as young man’s lovesick lament and was then, in succession, transformed into a hymn sung by Germany’s Lutheran faithful, appropriated by a composer–considered by some the greatest that ever lived–for one of his crowning achievements, and then, over two hundred years later, was spun into a rumination on the American experience at a time when the Watergate scandal was roiling to a full boil and the U.S. was beginning its withdrawal from Vietnam.  Intrigued?  I hope you’ll read on.

I. A Secular Start

In 1601, Hans Leo Hassler (1564 – 1612), a German composer and organist, published a volume of music called Lustgarten neuer teutscher Gesäng, Balletti, Gaillarden und Intraden (A Pleasure Garden of New Teutonic Songs, Ballets, Gaillards and Intradas).  Of the 50 compositions included in the collection, 39 were vocal works and 11  were instrumental selections.

One of the vocal works was a secular love song, to be sung by five voices, called “Mein G’müth ist mir verwirret” (“I’m all mixed up”). 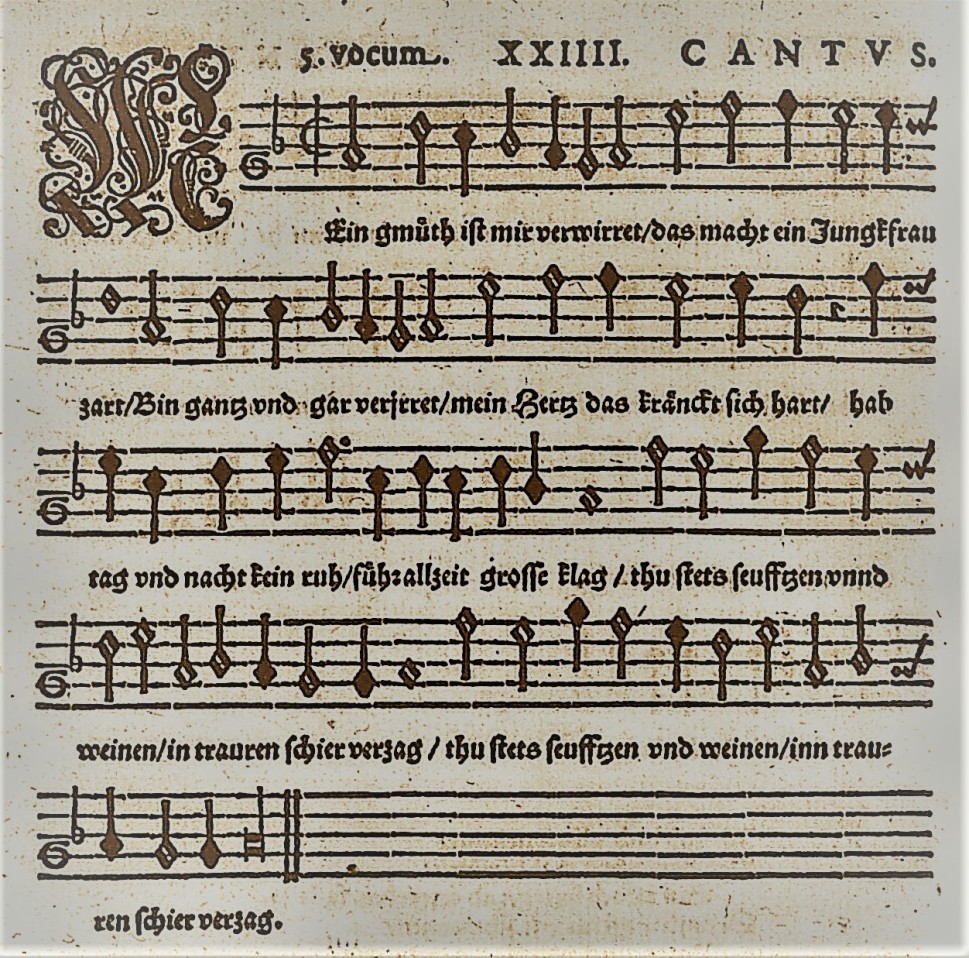 Here’s the first of the five verses performed by the German vocalists, Ensemble Diapasón.

I’m all mixed up;
This, a tender maid has done to me!
I’m totally lost;
My heart is sick and sore.
I get no rest by day or night,
My pain is always so great.
I’m sighing and crying all the time;
I’m almost in despair.

Let’s remain in Germany and move further into the 17th century.  Meet Paul Gerhardt (1607 – 1676), a theologian, Lutheran minister and prolific creator of hymns.

As a theologian and minister, Gerhardt would have been familiar with a medieval poem, Salve mundi salutare (All Hail, Savior of the World).  The poem consisted of seven cantos, each of which addressed a part of Jesus’ body–his feet, knees, hands, side, breast, heart, and head–as he was dying on the cross.   Gerhardt translated the entire work into German from its original Latin and in 1656, the seventh section, Salve caput crucentatum, which focused on Jesus’ head, was set to a rhythmically simplified version of Hassler’s love song melody and published in a popular hymnal of the day.  The well-known first line of the hymn: “O Haupt voll Blut und Wunden” (“O Sacred Head Now Wounded”).

J.S. Bach was born 9 years after Gerhardt died.  An extraordinarily devout Lutheran, he would come to know Gerhardt’s hymns well and, in 1727, would weave the melody of “O Sacred Head” into one of his own works.  Hassler’s lovesick lament was now placed in the service of “passion” of a very different kind: the Passion story (from passio, a participle of the Latin verb “to suffer”), which recounts the events leading to Jesus’ crucifixion.  Bach’s sacred oratorio, the St. Matthew Passion, has been referred to by many as the Mount Everest of Western music.  This monumental work, written for three choirs, two orchestras and multiple soloists, is three hours long and was first performed in Leipzig on Good Friday in 1727.

The Saint Matthew Passion, in addition to arias and recitative, contains twelve chorales, hymn tunes arranged in four-part harmony, i.e., for soprano, alto, tenor and bass voices.  (Contrast this with what generally happens during a church service, with members of the congregation all singing the same melodic line accompanied by an organ).  Hassler’s melody, the so-called “passion chorale”, is heard five separate times over the course of the oratorio.  Repetitive?  Boring?  Not a chance.  Bach’s harmonizations allow each appearance of the chorale to effectively convey the mood of what’s happening at that time in the Passion story. 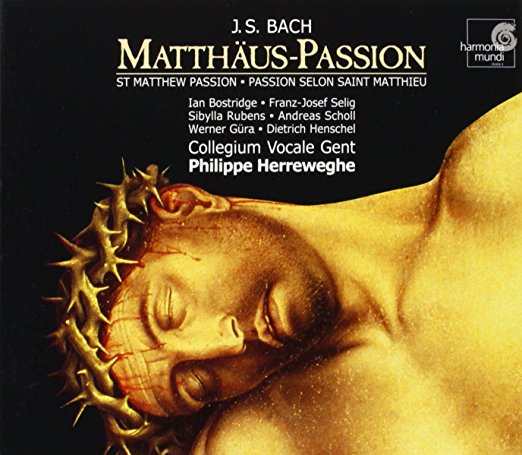 I’ll offer two examples, using video snippets of a performance by Philippe Herreweghe and the Collegium Vocale Gent.  The first time we hear the melody, it’s paired with text representing a worshiper asking for Christ’s acceptance and acknowledging the spiritual blessings he provides.  The sentiments are uplifting, befitting the bright key of E major.

My Shepherd, now receive me
My Guardian, own me Thine.
Great blessing Thou didst give me,
O source of gifts divine.
Thy lips have often fed me
With words of truth and love;
Thy Spirit oft hath favored me
To heavenly joys above.

The fifth and final time we hear the chorale is in the moments after Christ’s death. The melody is the same, but the harmonization–with its many accidentals and discordant intervals–conveys a vastly different, and appropriate, mood: one of anguish. The words are, again, those of a worshiper, this time pleading for Christ’s presence at the time of his/her own death.  This particular setting of the chorale is, for me, almost unbearably beautiful; its mere minute and sixteen seconds contain an entire world of emotion.

My Savior, be Thou near me
When death is at my door.
Then let Thy presence cheer me,
Forsake me nevermore.
When soul and body languish,
Oh, leave me not alone,
But take away mine anguish
By virtue of Thine own.

[Now two brief personal comments.  The first is that I went to a performance of the St. Matthew Passion last Sunday, and each of the five iterations of this melody raised gooseflesh, thus inspiring this post.  The second is that I was baptized and confirmed in the faith so deeply felt by Gerhardt and Bach and I’m grateful I was, because it exposed me to some important sacred music traditions. As an adult, however, organized religion has not been a key part of my life.  Among the bits of paper ornamenting my refrigerator door is this quote: “I don’t go to church. It’s how you behave in life, not whether you go to church and pray, that makes you a worthy human being.” Music and art are my religion.]

IV.  Circling Back To The Secular

Drawing to a close now in what is easily the longest post I’ve done here at Augenblick.

Paul Simon’s second solo album, There Goes Rhymin’ Simon, was released in 1973 and included the song “American Tune”; Simon isn’t addressing passion, or ‘The Passion’, but rather the sense of weariness, uncertainty, and misdirection that pervaded the country at the time.  The melody is clearly inspired by the work of Hassler, who, I imagine, might be nonplussed to learn that his composition, 417 years after he committed it to parchment for the first time, is thriving well into the 21st century.

Many’s the time I’ve been mistaken
And many times confused
Yes, and often felt forsaken
And certainly misused
But I’m all right, I’m all right
I’m just weary to my bones
Still, you don’t expect to be
Bright and bon vivant
So far away from home, so far away from home
And I don’t know a soul who’s not been battered
I don’t have a friend who feels at ease
I don’t know a dream that’s not been shattered
or driven to its knees
But it’s all right, it’s all right
We’ve lived so well so long
Still, when I think of the road
we’re traveling on
I wonder what went wrong
I can’t help it, I wonder what went wrong

Miscellany:
On Good Friday 5 years ago, I made this post about another part of the St. Matthew Passion.

If you’re at all intrigued by this work and want to hear more, but squirm at the prospect of the three-hour performance time, NPR did a very nice, instructive overview (50 minutes total) back in 2014.