Would you ever have guessed that Charo–she of “coochie coochie” fame–has a connection to the iconic original (1925) cover of F. Scott Fitzgerald’s The Great Gatsby? The creator of the gouache painting, titled ‘Celestial Eyes’, was Francis Cugat (1896 – 1981), the brother of Charo’s husband, orchestra leader Xavier Cugat.  Commissioned to do the dust cover art in 1924, while Fitzgerald was still at work writing, Cugat received $100 for his efforts. 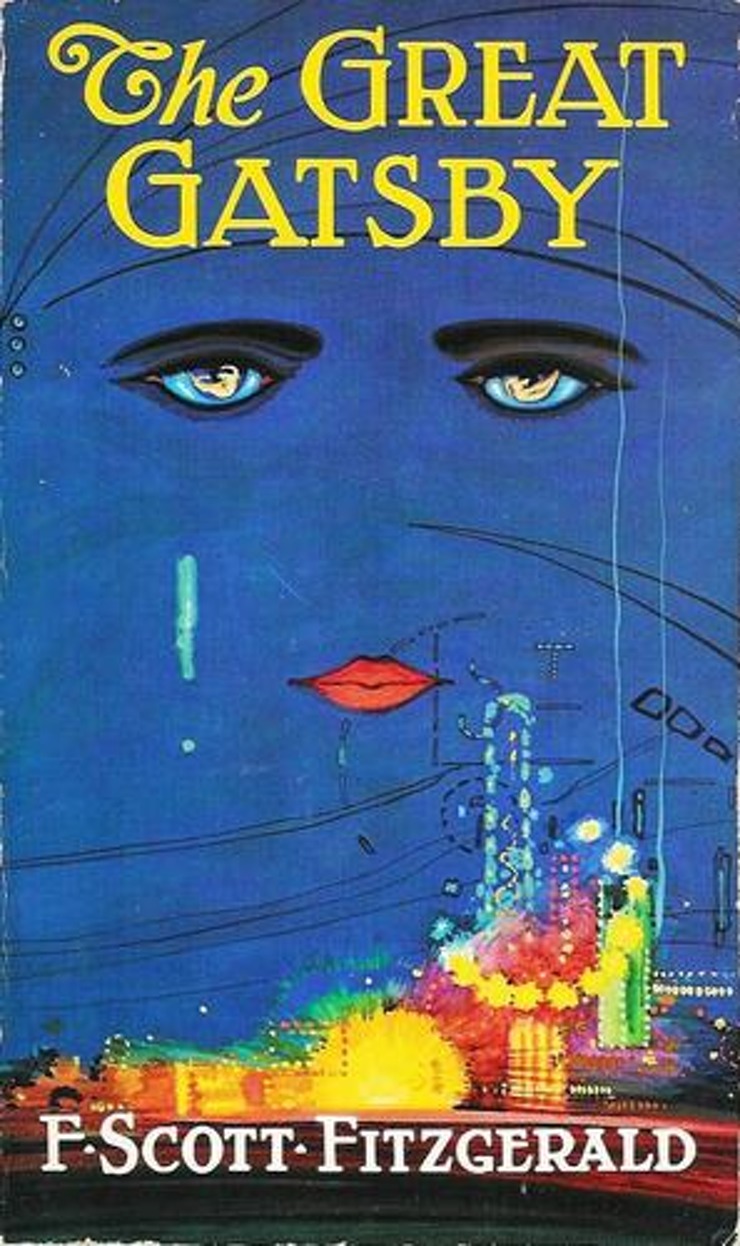 An interesting aspect of the cover is that, rather than Cugat having been inspired by anything in Fitzgerald’s manuscript, the image is his own conception and Fitzgerald actually co-opted it for the story: “For Christ’s sake don’t give anyone that jacket you’re saving for me,” he wrote to his editor, “I’ve written it into the book.”  What Fitzgerald may be referring to is a billboard that’s mentioned in the novel, an ad for an ‘oculist’ by the name of Dr. T.J. Eckleburg:

“The eyes of Doctor T. J. Eckleburg are blue and gigantic — their irises are one yard high. They look out of no face, but, instead, from a pair of enormous yellow spectacles which pass over a nonexistent nose. Evidently some wild wag of an oculist set them there to fatten his practice in the borough of Queens…”

I love everything about the cover: the eyes (with their human irises) and vivid red lips suspended in a rich, blue night sky; the explosion of saturated color that looks like a carnival or boardwalk attraction (if the Vegas strip existed in the early 20’s it could have been depicted like this); the lines above the eyes that appear to suggest the creases of a cloche hat; the vertical line of light blue under the left eye (a shed tear?, an exclamation point?); the serif font.

But surpassing all of the various cover images trotted out over the years (and there’s a ton of them; see below for just a small sampling), as well as all five movie adaptations (including a silent one in 1926, just a year after the book was published), is the book itself, with its clear, unadorned prose.  Like many others over the years, I read Gatsby for the first time in high school.  I have a very clear memory of the day when, during a class discussion, my English teacher, Mr. Coburn, noted that the word daisy came from the Old English name dægeseage, meaning “day’s eye”, and then said that the ‘eye’ of any day is the sun…and Daisy was, truly, the sun of Gatsby’s world: she was the center of his universe, everything revolved around her.  My mind was blown: that was the first time I understood that writing had layers of meaning to be mined, that there was real significance to be found if we took the time to read thoughtfully.

And the ending is, well, classic:

“Gatsby believed in the green light, the orgiastic future that year by year recedes before us.  It eluded us then, but that’s no matter–tomorrow-we will run faster, stretch out our arms farther….And one fine morning—–

So we beat on, boats against the current, borne back ceaselessly into the past.”