Even though the science behind the ‘right brain, left brain’ phenomenon has been debunked, I love this print ad campaign created by Shalmor Avnon Amichay/Y&R Interactive Tel Aviv for Mercedes-Benz back in 2011.  There are three different versions: “Paint” (above), “Music” and “Passion (both below). 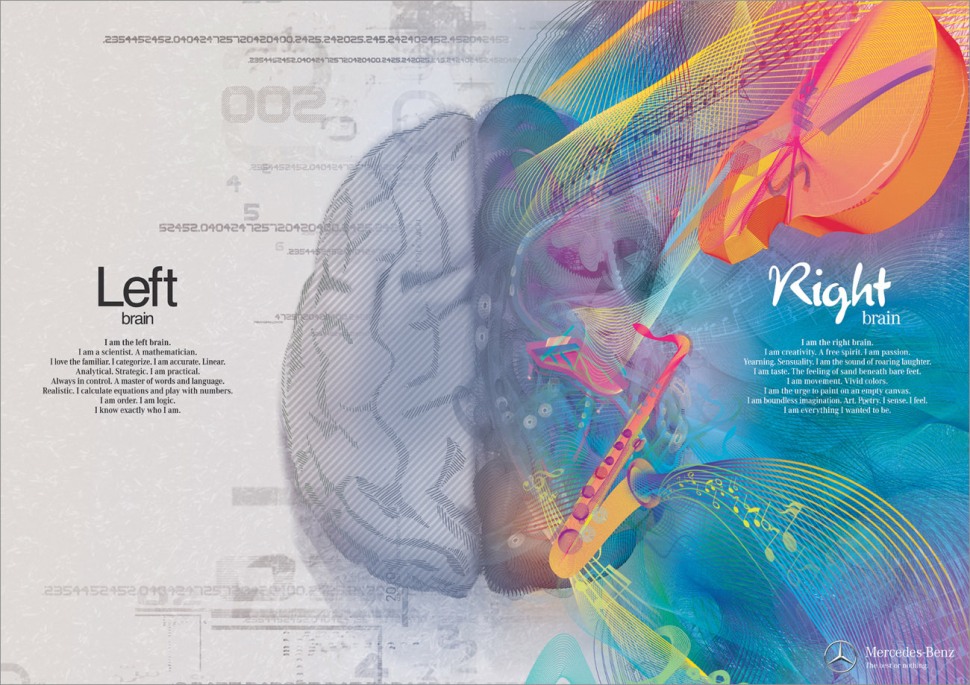 The text for the left brain reads:

“I am the left brain. I am a scientist. A mathematician. I love the familiar. I categorize. I am accurate. Linear. Analytical. Strategic. I am practical. Always in control. A master of words and language. Realistic. I calculate equations and play with numbers. I am order. I am logic. I know exactly who I am.”

And for the right brain:

“I am the right brain. I am creativity. A free spirit. I am passion. Yearning. Sensuality. I am the sound of roaring laughter. I am taste. The feeling of sand beneath bare feet. I am movement. Vivid colors. I am the urge to paint on an empty canvas. I am boundless imagination. Art. Poetry. I sense. I feel. I am everything I wanted to be.” 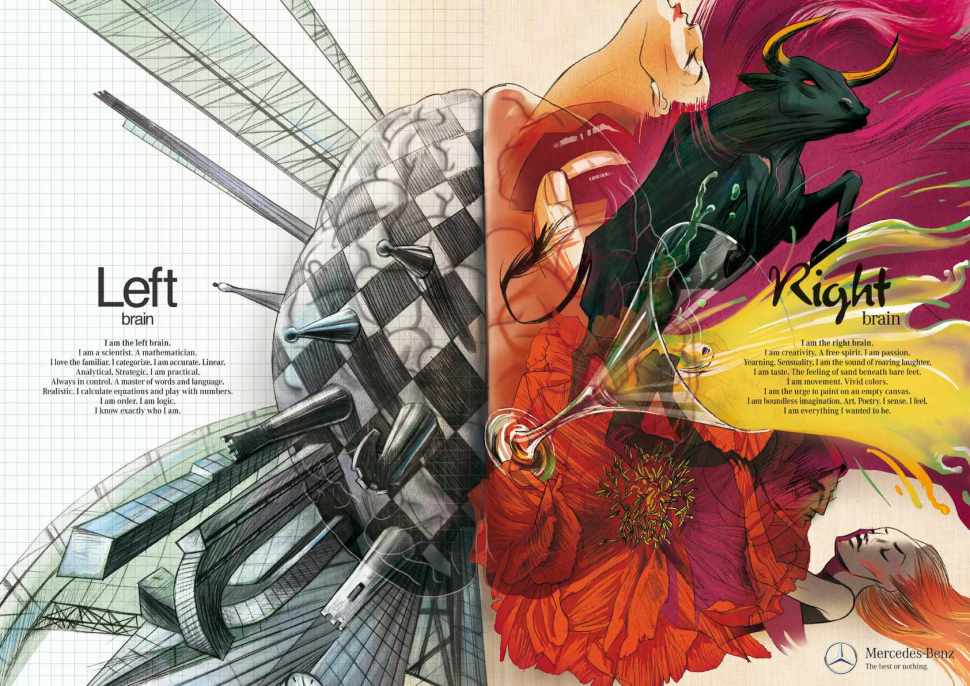 It’s now understood that a person really can’t legitimately be referred to as a ‘left brain person’ or a ‘right brain person’–despite all of those on-line tests that invite you to learn which category you fall into–because both sides of the brain contribute to analytical and creative processes.  I’d say the Mercedes campaign is very effective, though…its message being that the brand combines top engineering and elegant design to deliver a satisfying automotive experience.

In a pivot that I hope doesn’t induce too many winces, I submit to you another product of Germany that embodied both the analytical and the creative: J.S. Bach. 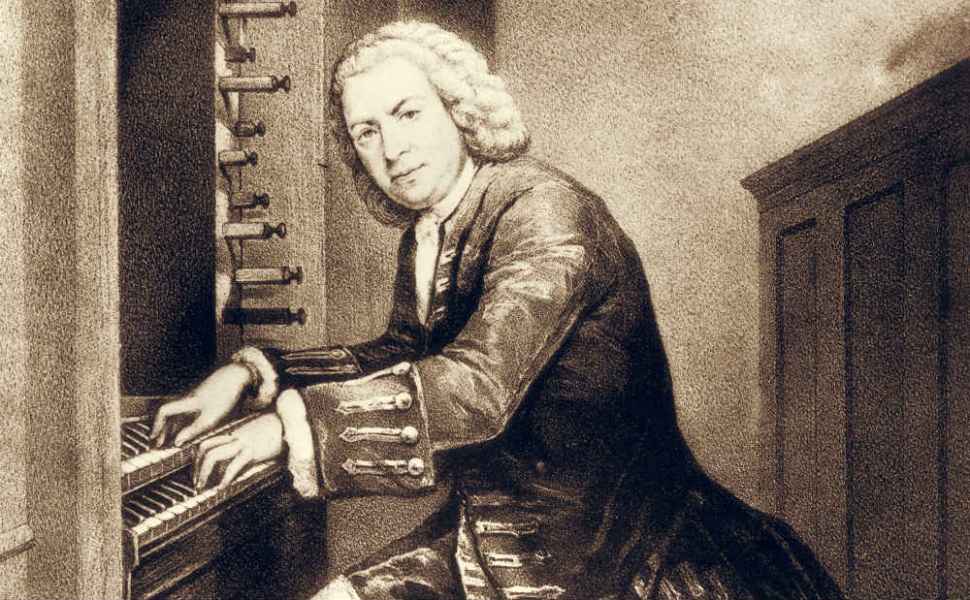 Of the many, many works one might use to illustrate these aspects of Bach’s genius, I’ve chosen a toccata.  Merriam-Webster defines a toccata, from the Italian for ‘to touch,’ toccare, as “a musical composition usually for organ or harpsichord in a free style and characterized by full chords, rapid runs, and high harmonies.”  While it’s true that most people are familiar with toccatas as pieces of music that are played on keys, the earliest toccatas dated to the early 16th century and were actually meant to be played on a stringed instrument like a lute or a vihuela da mano, a 5- or 6-stringed guitar-shaped instrument.  It was later in the 16th century that keyboard composers named their own virtuosic works toccatas.  But whether it was strings of a lute or the keys of an organ or harpsichord being touched, the works presented an opportunity for a performer to show off their manual dexterity.

Bach composed a number of toccatas for the keyboard; those for the organ, one in particular, are much better known than the seven (BWV 910-916) he wrote for the harpsichord.  These latter works, which rank among his earlier compositions–they were written around 1708-1710, when Bach was in his early 20’s–are made up of different sections of contrasting texture, meter, tempo, and tonality; they all contain fugues.

I’ve recently been working on the final fugue from the Toccata in D minor (BWV 913).  A fugue essentially presents one or two themes and repeats them, weaving them together in layers back and forth between the left and right hands.  (The word is derived from the Latin for flight, ‘fugere‘; one can imagine the themes chasing each other back and forth across the page, under and over the staves of music).  Playing the fugue calls for a degree of rigor and precision that’s both intensely challenging and satisfying.  (As the Mercedes ‘left brain’ ad copy has it: “I am order.  I am logic.”)  I tend to agree with what pianist and writer Charles Rosen had to say about Bach’s works for keyboard: “Many of the more complex details can be appreciated fully only by the performer–they can be heard, but their significance can never by entirely grasped until one has felt them under one’s fingers.”

I’m particularly fond of this recording by Jeffrey Biegel, playing a Steinway D. (I’m a creature of the era I live in: I prefer hearing Bach on the piano, not the harpsichord…if that makes me gauche, so be it).  Both when I listen to this, and when I play it myself, the ‘right brain’ is fully engaged as well: “I sense. I feel.” Some of the sequences–0:28-33, 0:46-51, and 3:08-3:15 in particular–give me goosebumps.

[For performances of the full toccata, there’s this live recording from 1991 by the formidable Russian pianist, Sviatoslav Richter and this from Canadian Glenn Gould.  (Note the difference in the performance times: Richter’s is ~12 minutes long, Gould’s just over 17).]

When thinking about how to best wrap this all up, I had decided that I would mention the fact that the chief music critic for the The New York Times, Anthony Tommasini,  had, in early 2011, compiled a list of the ten greatest composers in history and placed Bach as number one.  Imagine my delight when I went back to look at the article and found these words, which are the exact point I’ve tried to convey in this very post:

“My top spot goes to Bach, for his matchless combination of masterly musical engineering…and profound expressivity.” 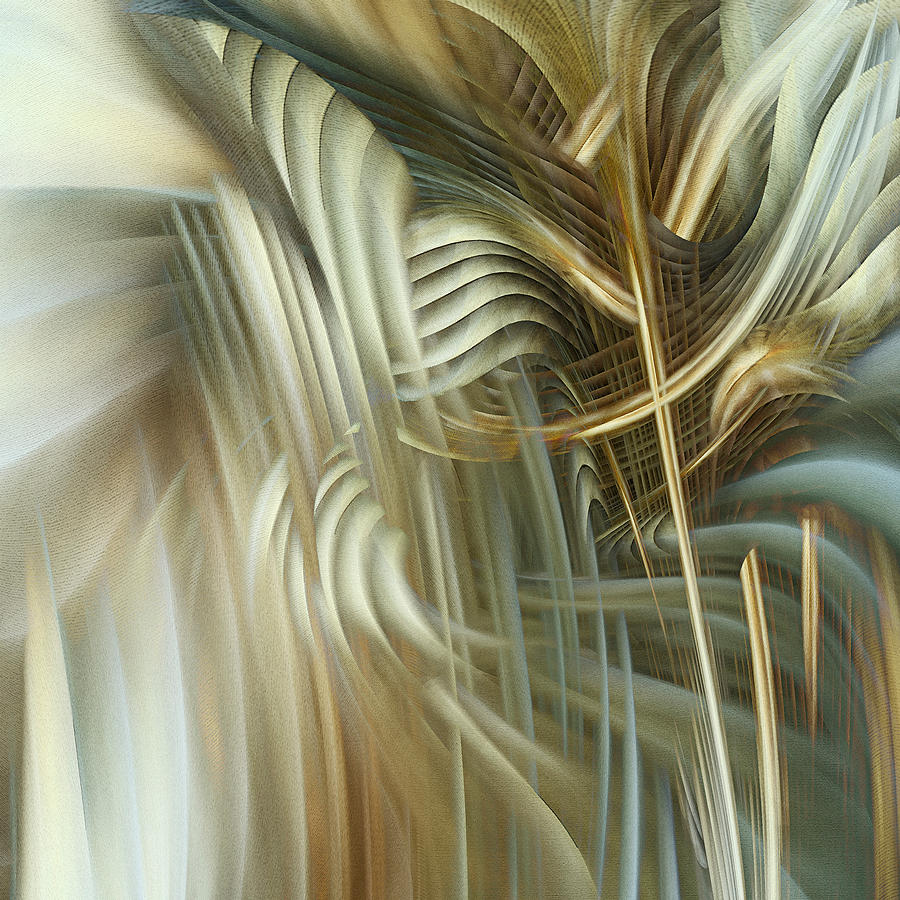